The latest upgrade for TScore and VScore has now been released.

This adds the ability to timetable your competition to run over multiple days (up to 3), with the corresponding ability in VScore to filter classes by day. 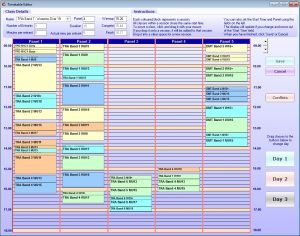 Note that at present, this is not intended to handle split qualification / finals over two days (we are still working on that one!)

It also includes the following fixes for TScore:

T036   If you used an old Export template, qualification highlighting did not work correctly

T037   Improvements to the table column layout in the Class Editor

and the following changes to VScore: